How the Courses Worked

The Gnostic Movement (TGM) offered a variety of free Gnostic courses from 2001-2005 through its primary website, ‘Mysticweb.org’. These classes were available to interested students both online through the website, and in person at one of TGM’s many study centers around the world.

When Belsebuub established Mysticweb in 2001, online learning through internet classes was a rarity, especially in the field of spirituality. Belsebuub’s vision for Mysticweb was to bring information for spiritual development to anyone with an internet connection, and the site was very successful in doing so.

A description of the Astral Course from Mysticweb.org

When Belsebuub first offered his courses, he began by writing the weekly material for a given course one week at a time, releasing a new installment each week until the whole course he was working on was completed. In this way, over roughly a year’s time, he had authored three main course offerings: Astral Travel and Dreams, A Course in Self-Discovery, and Esoteric Wisdom.

With these courses established, Mysticweb was in the position of having a comprehensive variety of courses on offer which taught the theory and practice behind subjects like astral projection and awareness of the present moment, but which also explicitly outlined what the spiritual path was, and how a person could transform themselves spiritually by walking upon it.

To this foundation other courses were added as time went on, such as the practice-based Advanced Investigation course, and the Teacher Training course, both of which could also be taken online or in-person.

Mysticweb distributed all course material free of charge. This was done based on the principle that spiritual knowledge should not be profited from, and should be accessible to anyone who wished to access it, rather than only to those who could afford to pay a fee. This is a principle Belsebuub has consistently upheld from the first time he taught to this day, even though he no longer teaches. Belsebuub’s books have always been sold as close to cost as possible, with no royalties ever being paid to him as the author.

The spiritual courses which Belsebuub authored and released through Mysticweb were initially distributed in PDF format, as PDFs were convenient to create and to transmit to students via email. When the courses were first running, PDFs were emailed directly to people who signed up for a course. The PDFs contained both the weekly topic and a practice exercise for people to try out during the week. Later on, all the PDFs were put into a common course area on the website, and an email sent out each week informing people where they could download that week’s topic as a PDF. Courses initially ran for eight week blocks throughout the year, with several weeks break before starting again, and later were revised to last for nine week blocks.

Some students were very eager to receive the PDFs each week, relating that they would often watch their inbox at the time given for the email to come with the new week’s topic. 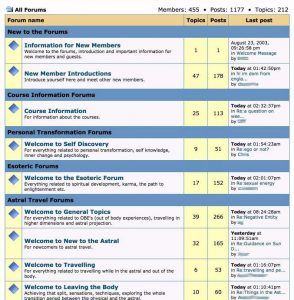 A screenshot of the public version of Mysticweb’s online forums

To enhance the courses and make them as interactive and effective as possible, Mysticweb offered corresponding online forums for each individual course. This was a place where registered participants could log in, discuss the course topic, ask questions, get responses from qualified course teachers, interact with other students, and generally gain motivation and insight from sharing what they were exploring from the week’s information and practices.

The course forums proved to be invaluable for those taking one of Mysticweb’s courses online, because they offered the “human interaction” element that would have otherwise been lacking if the course was purely written material. These forums were also a new innovation in teaching spirituality online (in the early 2000s). For these reasons as well as the subject matter, Belsebuub’s courses and Mysticweb.org were very well received.

Changing From PDF to Book Format

The content that Mysticweb offered freely in convenient PDF format was so successful that the site grew in popularity quickly, reaching a wide range of people from all over the world. Near the end of Mysticweb’s main period of activity, tens of thousands of people had taken a course. 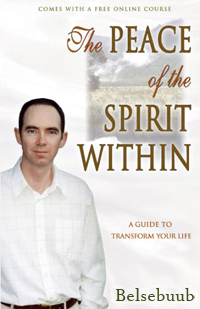 Print book version of A Course in Self-Discovery course

The information that Belsebuub had written was so unique, clearly explained, comprehensive, and effective, that many people started to take his material from the PDF format, and repackage, sell, or otherwise use it for their own purposes, most of the time failing to credit Belsebuub as the original source.

Besides being a violation of intellectual copyright, the people who started selling parts of his work also violated the spirit of sharing spiritual information freely. In this way the course material began to spread out over the Internet in a confused and convoluted manner, removed from its original source and lacking the structure that would allow people to make full use of it, and to progress to more advanced spiritual topics in the best way. For these reasons, steps needed to be taken to safeguard the integrity of the courses and Belsebuub’s work.

To this end, the PDFs were eventually removed from distribution, and assembled into book format as a way to protect them from being so easily misused. Books were created for each of the following courses based on the original course PDFs: Astral Travel and Dreams, A Course in Self-Discovery, and Esoteric Wisdom.

The books were sold as close to cost as possible by Belsebuub’s publisher, while Belsebuub didn’t receive payment or royalties from the sale of his books in any way. Any profits from book sales went back into the publishing and promotion of more books so Belsebuub’s work could spread to more interested people no matter where they were in the world.